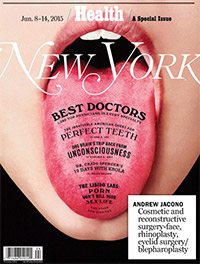 Top Doc Dr. Jacono
in New York Magazine
Dr. Andrew Jacono has been awarded the prestigious honor of being recognized as one of the Most Compassionate Doctors 2012 – 2017 based upon reviews by his patients. The recognition is a component of the Patient Choice rating program where thousands of patients provide online feedback on bedside manner, doctor-patient face time, follow-up care, ease of appointment, setting, and courtesy of office staff.

The award recognizes “faithful service to patients” and out of 870,000 active doctors only 3% receive this honor where patients specifically give feedback on physician’s who accompany compassion with their care.

Doctor Jacono feels honored to have received this recognition from his own patients. He feels that approaching treatment in a patient-centered context should be of upmost priority in order to ensure quality treatment and care. He strives to take all patient feedback, whether online or in person, very seriously.

Doctor Jacono performs Charitable Surgery for Children with Cleft Lip and Palate on Missions to Third World Countries and also on Women who are Victims of Domestic Violence. … END_OF_DOCUMENT_TOKEN_TO_BE_REPLACED