There are many types of facelift procedures performed and they are not created equally or create the same results. The SMAS is the muscle of the face that drops with age and had the scientific name superficial (S) musculo (M) aponeurotic (A) system (S). When the SMAS becomes loose, redundant and drops with age, it creates laxity along the lower face and jawline creating jowls, marionette lines, and nasolabial folds.

Facelift techniques generally lift the skin of the face, but how the SMAS muscles under the facial skin are treated differs. SMAS facelift before and after creates natural facelift results that appear smooth and natural and not “plastic” as will be described below. Everyone who considers a facelift wants to look younger but does not want to like they had a facelift, and this can be avoided with SMAS facelift technique.

SMAS is an acronym for the superficial musculoaponeurotic system which is a layer of fibrous tissues and muscles that start just in front of and below the ear extending down to the neck. This thin yet strong layer covers and connects the muscles and structures of the face, the midface, and the neck together as a continuous fibromuscular tissue. It encompasses areas of muscles, fat pads, and the entire cheek area, as well as, attaching to the superficial muscle that covers the lower face, the jawline, and neck muscles called the platysma. The platysma muscle in the neck creates vertical muscle bands in the neck and “turkey neck” as we age. This fibrous layer is then concealed below a layer of fat (adipose tissue) and skin. The purpose of the SMAS is to ensure that the mimic muscles, which are important for the expressions of the face, are positioned normally.

SMAS Facelift Before and After Patient 1: This beautiful woman wanted to look refreshed and younger without looking fake or plastic. Dr. Jacono performed a SMAS facelift which included his signature deep plane facelift to lift her drooping cheeks, nasolabial folds, and early signs of jowling. He also performed a lower eyelid lift with a temporal lift which opened up her eyes. To complete the overall natural rejuvenation, Dr. Jacono also performed a closed rhinoplasty to address her dropping nasal tip and the hump on her nasal bridge. You can see in her after photos how balanced her facial appearance is. She looks natural and years younger. Best of all, with her hair pulled back, there are no visible scars. She loves her new look and feels like she is back in her twenties. 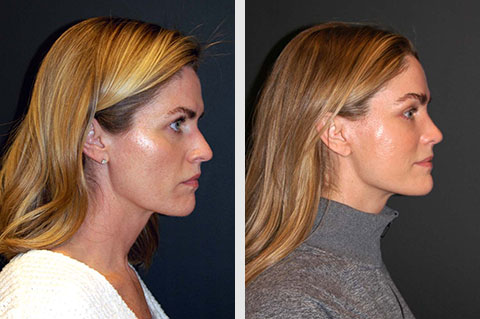 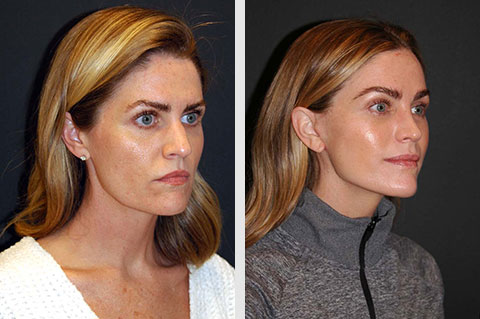 There are three main types of SMAS facelift treatments, a SMAS plication facelift, Extended SMAS Facelift, and High SMAS Facelift Techniques. In traditional face-lifting, the skin is lifted but the underlying SMAS is not lifted or supported which can create an unnatural tight stretched appearance to the face, often distorting the corners of the mouth (often referred to a puppet mouth). This is prevented by supporting the SMAS layers to obtain the most natural results.

SMAS Plication facelift lifts the SMAS by placing sutures in the SMAS layer (that creates the jowls) and the platysma (that creates the drooping neck) to tighten them. This is a simple procedure, but the suturing technique does not last as long, often creating results that last only 2 or three years. While most surgeons can execute this procedure, Dr. Jacono does not suggest it because he believes facelifts should last 10 years or more, and this can be accomplished by lifting the SMAS.

Extended SMAS Facelift and High SMAS Facelift Techniques do not simply suture the SMAS up but lift the SMAS and platysma muscle. A muscle “flap” is created, lifting the muscle off the structure of the face, and smoothing it out. Because extra SMAS is created as we age, the redundant excess is removed and then it is secured higher in the face from which it dropped. This is a true structural re-engineering of the face that re-supports the beams of the face that weaken with age. This is why the results have greater longevity. This support of the deeper layers of SMAS in both the Extended SMAS and High SMAS facelift, but they differ in that the Extended SMAS technique targets the jawline and neck, while the High SMAS technique can lift the cheeks that droop as well as the jowls and neck because the layers of SMAS in the upper face is also lifted. The Upper Face and Cheek SMAS are the “High SMAS”. Depending on what portion of your face has aged Dr. Jacono will suggest the Extended SMAS or High SMAS approach.

SMAS Facelift Before and After Patient 2: This patient wanted to refresh her appearance while looking natural and younger. Dr. Jacono performed a deep plane facelift and a lower blepharoplasty to address her concerns. Dr. Jacono also repositioned the lower eye bags to reduce the appearance of her dark eye circles. Her after photos show her cheeks have been lifted to reverse the drooping affect and the hollows under her eyes were smooth and filled. She looks natural and decades younger. 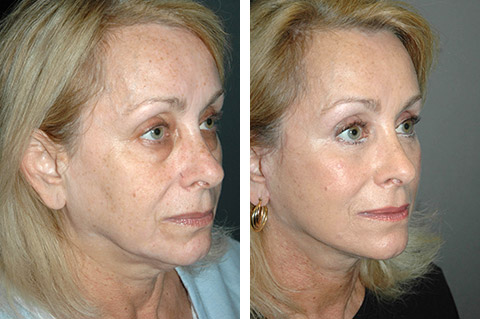 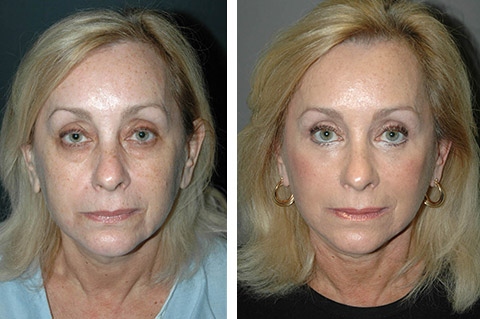 Some characteristics of a SMAS Facelift include:

Patients will need to wear a bandage around their face for a full day and their head should be elevated with three pillows when sleeping. During a visit on the following day with Dr. Jacono and his staff, they will ensure that everything is looking perfect and healing properly. At that time, the bandages will be removed and some bruising and swelling will be seen.
In general, patients should be able to return to work within one to two weeks following their procedure. There will still be some swelling and bruising but nothing that should prevent patients from returning to work and most normal activities.

SMAS Facelift Before and After Patient 3: This female patient in her mid-fifties wanted to lift her cheeks which had fallen and remove the appearance of her noticeable jowls. Above all though, she really wanted to remove her ‘turkey neck’ which hung low below her chin. To address her concerns, Dr. Jacono performed his signature deep plane facelift to naturally lift the cheeks, a neck lift with platysmaplasty to smooth the neck and jawline. Her after photos are taken 8 weeks after her surgery and she looks and feels terrific. She is overjoyed with her results. 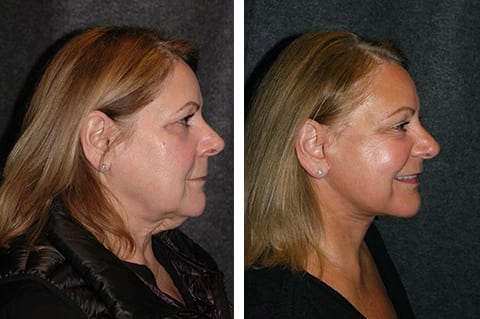 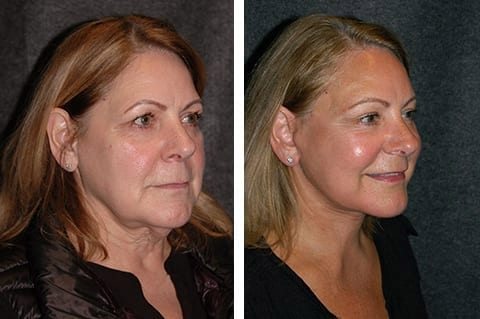 SMAS Facelift Before and After Patient 4: This middle-aged woman was unhappy with her saggy neck, jawline, and cheek area. She elected to have a SMAS facelift with Dr. Jacono to correct those problem areas. Her after photos show a more youthful appearance with a tighter jawline, smoother neck, and fuller cheeks.

SMAS Facelift Before and After Patient 5: This female patient was unhappy with her jowls and wrinkled sagging neck. Dr. Jacono performed a SMAS facelift on her and the after photos show a defined jawline with a wrinkle-free and tighter neck.

Men and women who are showing the signs of aging with droopy, sagging facial skin are typically good candidates for the SMAS Facelift procedure. It is best that candidates are in good health and do not have any medical conditions that impair the healing process. Patients should have realistic expectations of the surgical outcome and a positive attitude. For best results, Dr. Jacono recommends that patients are non-smokers and should let him know any medications they may be taking.

SMAS Facelift Before and After Patient 6: This lovely woman wanted to reverse the signs of aging that had caused her cheeks to drop and her jowls to begin to bulge. She also was unhappy with the loose skin under her neck that was hanging there. Dr. Jacono performed a SMAS face lift to correct these issues. You can see in her after photos that her cheeks have been lifted to their natural position and her smooth jawline. You can see that her wrinkles are virtually all gone and her neckline looks amazing. She is very happy with her results and feels like she did 15 years ago.

SMAS Facelift Before and After Patient 7: This wonderful lady was concerned with how the affects of aging was making her look. She did not like her sagging cheeks and her very visible jowls. She also did not like the sagging skin on her neck which showed a lot of wrinkles. A SMAS face lift procedure was performed by Dr. Andrew Jacono to address all of her concerns. Her after photos shows that her neckline is smooth and looks great, while her drooping cheeks were lifted and her jaw line looks smooth with no jowling.

SMAS Facelift Before and After Patient 8: This patient did not like her sagging double chin and fatty jowls. She decided to have Dr. Jacono performed a SMAS facelift on her trouble areas and the after photos show a more youthful appearance with a defined jawline.

This error message is only visible to WordPress admins

Error: No users set. Please visit the plugin's settings page to select a user account or add one to the shortcode - user="username".

Doctor Jacono performs Charitable Surgery for Children with Cleft Lip and Palate on Missions to Third World Countries and also on Women who are Victims of Domestic Violence. … END_OF_DOCUMENT_TOKEN_TO_BE_REPLACED