Until now, two varieties of laser treatment have been available for cosmetic enhancement-ablative and non-ablative.

Fraxel® Erbium Laser Treatment is designed to target aging and damaged skin by creating microscopic “wounds” within the targeted areas well beneath the skin’s outermost layer. In this way, Fraxel® Laser treatments trigger the body’s own natural production of new collagen and skin cells. And because Fraxel® Laser Treatment combines the impact of ablative lasers with the gentleness of non-ablative lasers, healing occurs so quickly that there is very little downtime for patients *usually a day or two). This laser treatment needs to be repeated 3to 6 times depending upon the degree of skin damage, but it allows you to continue life without the longer downtime of Fractional CO2 lasers. 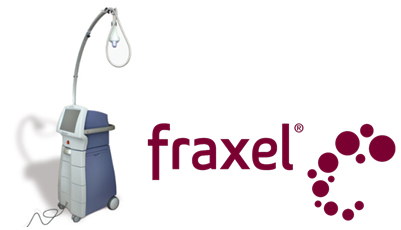 After several years of studies and mounting evidence of the Fraxel® Laser’s safety and effectiveness, the FDA has cleared this unique new laser to treat the following conditions:

Fractional CO2 laser resurfacing has the benefit of requiring only one treatment to achieve the results of 3 to 5 fractional erbium laser treatments, but it requires a 5 to7 day down time where you need to apply ointment to the skin so you will need to take off from work. Fractional CO2 laser is better than an old fully ablative CO2 laser because the older style co2 laser had a high rate (as high as 10% in some studies) of scarring and loss of the natural color of the skin (hypopigmentation) and had a recovery time that could take 6 weeks to 3 months

Fractional Laser Patient 1: Before and after fractional laser CO2 treatment for a woman in her forties who wanted to rejuvenate her skin, smooth wrinkles, reduce rough textures and large pores. She underwent 1 treatment.

Fraxel Laser AcneScar Patient 3: Before and after treatment with fraxel laser for reduction of acne scarring. Before fraxel laser, dermabrasion and ablative lasers required weeks of recovery.

To learn more about laser facial rejuvenation and skin resurfacing, contact Dr. Jacono’s New York City office at 212-570-2500 or call his Long Island office at 516-773-4646. If you would like to ask a question or use our online consultation form, one of our patient care coordinators will be glad to assist you.

Doctor Jacono performs Charitable Surgery for Children with Cleft Lip and Palate on Missions to Third World Countries and also on Women who are Victims of Domestic Violence. … END_OF_DOCUMENT_TOKEN_TO_BE_REPLACED