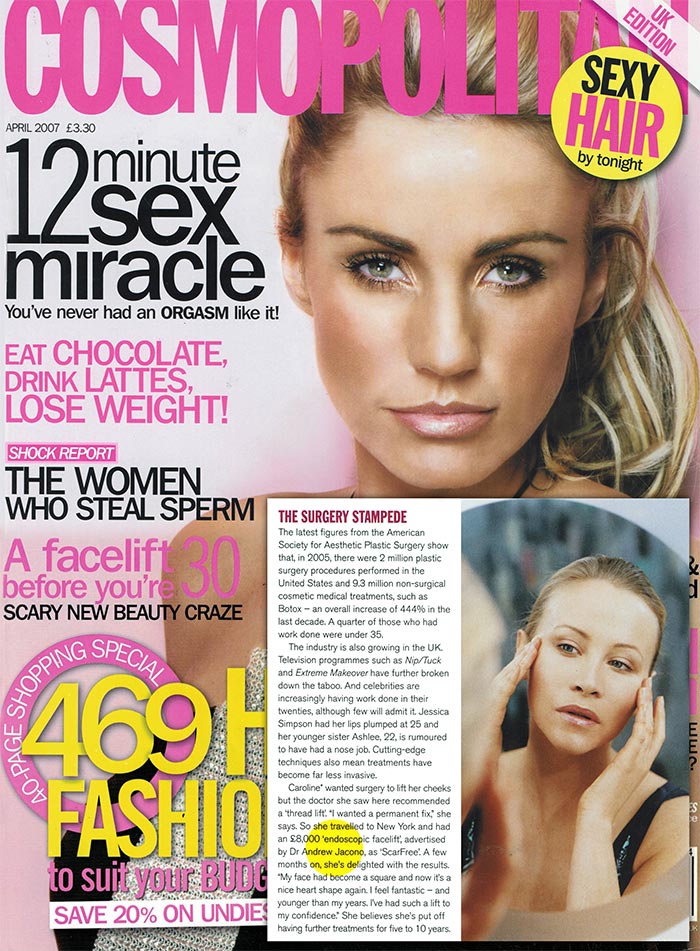 The latest figures from the American Society for Aesthetic Plastic Surgery show that, in 2005, there were 2 million plastic surgery procedures performed in the United States and 9.3 million non-surgical cosmetic medical treatments, such as Botox – an overall increase of 444% in the last decade. A quarter of those who had work done were under 35.

The industry is also growing in the UK, Television programs such as Nip/Tuck and Extreme Makeover have further broken down the taboo. And celebrities are increasingly having work done in their twenties, although few will admit it. Jessica Simpson had her lips plumped at 25 and her younger sister Ashlee, 22 is rumored to have had a nose job. Cutting-edge techniques also mean treatments have become far less invasive.

Caroline wanted to get surgery to lift her cheeks but the doctor she saw recommended a ‘Thread Lift’. “I wanted a permanent fix”, she says. So, she traveled to New York and had an £8,000 ‘endoscopic facelift’, advertised by Dr. Andrew Jacono, as ‘Scarfree’. A few months on, she’s delighted with the results. “My face had become a square and now it’s a nice heart shape again. I feel fantastic – and younger than my years. I’ve had such a lift to my confidence.” She believes she’s put off having further treatments for five to 10 years.

Doctor Jacono performs Charitable Surgery for Children with Cleft Lip and Palate on Missions to Third World Countries and also on Women who are Victims of Domestic Violence. … END_OF_DOCUMENT_TOKEN_TO_BE_REPLACED