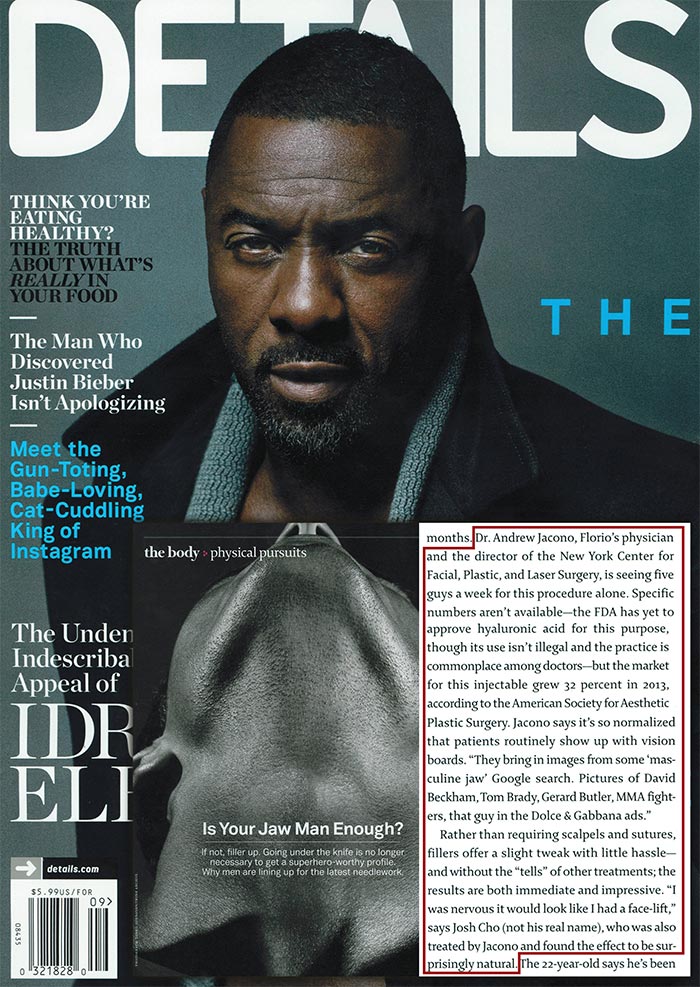 Is Your Jaw Man Enough?

Dr. Jacono was featured in Details magazine in an article that discusses the appearance of a masculine jaw.

Dr. Andrew Jacono is the director of the New York Center for Facial, Plastic, and Laser Surgery is seeing five guys a week for this procedure alone. Specific numbers are not available – the FDA has yet to approve hyaluronic acid for this purpose, though its use is not illegal and the practice is common among doctors – but the market for this injectable grew 32% in 2013, according to the American Society for Aesthetic Plastic Surgery. Jacono says it’s so normalized that patients routinely show up with vision boards. “They bring in images from some ‘masculine jaw’ Google searches. Pictures of David Beckham, Tom Brady, Gerard Butler, MMA fighters, that guy in the Dolce & Gabbana ads.”

Rather than requiring scalpels and sutures, fillers offer a slight tweak with little hassle – and without the “Tells” of other treatments; the results are both immediate and impressive. “I was nervous it would look like I had a facelift,” says a male patient who was treated by Dr. Jacono and found the effects to be surprisingly natural.

“Dr. Andrew A. Jacono specializes in minimally invasive facial rejuvenation. He is an assistant clinical professor at New York Eye and Ear Infirmary and Albert Einstein College of Medicine. He is head of facial plastic surgery at North Shore University Hospital and fellowship director for the American Academy of Facial Plastic and Reconstructive Surgery. Dr. Jacono has been published in Aesthetic Surgery Journal and Archives of Facial Plastic Surgery and has been featured on Good Morning America, Anderson, CNN and in USA Today, Parade and Newsweek. His television series, Facing Trauma, appeared on OWN. He is a senior adviser to FACE TO FACE, which provides pro-bono surgery to domestic violence victims, and is a volunteer surgeon for Healing the Children.”

Doctor Jacono performs Charitable Surgery for Children with Cleft Lip and Palate on Missions to Third World Countries and also on Women who are Victims of Domestic Violence. … END_OF_DOCUMENT_TOKEN_TO_BE_REPLACED