The State of the Modern Facelift

The facelift has always been one of the most popular and hotly contested solutions to aging. The first-ever facelifting technique, the traditional facelift, is an invasive four-hour procedure. It pulls the skin taut without manipulating the underlying facial anatomy of muscles, ligaments, and connective tissues.

The result of a traditional facelift is a wrinkle-free appearance that, while impressive, looks somewhat unnatural. The best-known examples of this include Jocelyn Wildenstein, Mickey Rourke, and Joan Rivers. 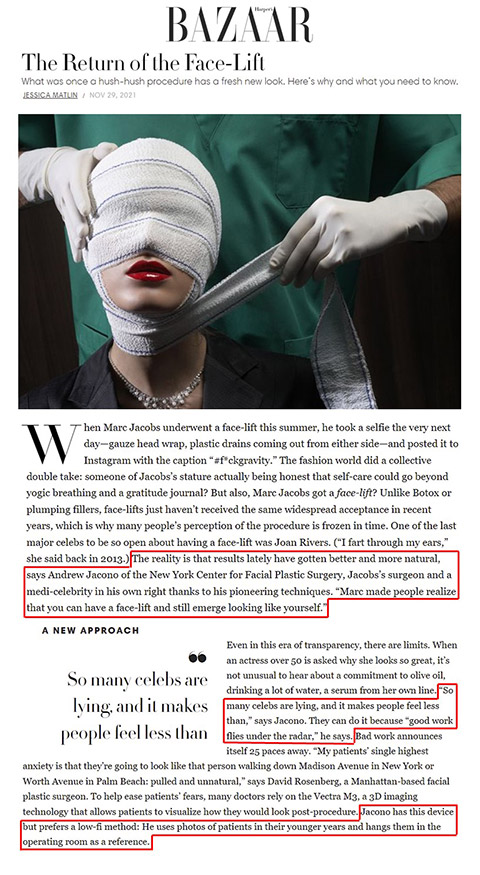 “The traditional facelift certainly gets rid of wrinkles and saggy skin,” explains Dr. Jacono. “But it also leaves a lot of people looking ‘tight’ and ‘pulled.’ In other words, they look like they’ve had significant work done. When people began to see these strange results, especially in the media, they became distrustful of plastic surgery.”

This taboo has persisted for many years. The majority of aesthetic surgeons are unhappy about this but cannot do much to fix the stigma. Luckily, though, a select few cosmetic masters have taken the facelift to new heights, ironing out the common kinks. In fact, the Extended Deep Plane Facelift, the current gold standard of facelifting, was pioneered and perfected by Dr. Jacono himself. It is such an outstanding, natural-looking procedure that, in July 2021, Marc Jacobs booked a surgical slot with Dr. Jacono. He then documented his recovery process on Instagram. The response was overwhelmingly positive, due in no small part to the fact that he looked just like himself, but twenty years younger.

“I’m incredibly impressed with Marc’s transparency,” says Dr. Jacono. “So many celebrities have lied about their surgical experiences, which has made a lot of people feel like getting cosmetic surgery is bad. The truth that Marc has highlighted is that it’s possible to get tweaks without looking distorted.”

So, what differentiates the Extended Deep Plane Facelift from others?

It’s All in the Details—and the Muscles

Surgeons dissatisfied with the traditional facelift developed a procedure known as the SMAS Facelift. This technique targets a deeper layer of tissues, ligaments, and muscles known as the SMAS (Subcutaneous Muscular Aponeurosis System). The SMAS, along with a section of overlying skin, is cut and stretched over the neck, cheeks, and jawline. This smooths the jowls and nasolabial folds. It also gets rid of turkey necks. Compared to the traditional facelift, the SMAS Facelift provides better, more consistent results. It also has a shorter recovery time.

The problem with the SMAS Facelift is that despite its obvious improvements, it can still make patients look “pulled.”

“For the most part, the SMAS Facelift is a good technique,” says Dr. Jacono. “It is more involved than the traditional facelift and requires much greater expertise. However, it still requires the excision of skin and the stretching of muscles that don’t necessarily need to be stretched.”

To address the failings of the SMAS Facelift, Dr. Jacono decided to go deeper, and quite literally. He set his sights on the face’s “deep plane,” the muscular architecture responsible for facial expression. Rather than stretching the deep plane and risking an unnatural-looking outcome, Dr. Jacono makes a short incision along the face’s natural creases. He then lifts specific pockets of fat, muscle, and tissue to a more desirable vertical position. The results are natural.

“Essentially, I’m sculpting,” says Dr. Jacono. “What’s great is that this technique allows me to re-create that sort of full, appley cheek without the need for injections like Botox or Juvéderm.” This impressive facelift boasts a recovery time of only 10 days. This can be further shortened with hyperbaric oxygen therapy and Vbeam laser treatment. Even better, the Extended Deep-Plane Facelift lasts between 12 and 15 years. After, patients will still look better than they did during their surgical consultation.

How Common is the Extended Deep-Plane Facelift?

Because the Extended Deep-Plane Facelift is an incredibly complex procedure, there are only a handful of surgeons who have been exposed to the technique. Even fewer have mastered it and offered it in their practices.

“The truth is that the Extended Deep-Plane Facelift is tough to learn, requires a lot of training, and demands a sharp aesthetic eye,” explains Dr. Jacono. “At the moment, I’m one of the few surgeons in the world who is confident enough to perform multiple Deep-Plane Facelifts a week.”

Dr. Jacono doesn’t want this dearth of qualified facial plastic surgeons to persist. In 2020, he published a 500-page textbook on the nuances of the technique.

“I want every doctor to be doing a better job,” he says. “If they were, people wouldn’t be so hesitant about getting a facelift and looking their best.”

Doctor Jacono performs Charitable Surgery for Children with Cleft Lip and Palate on Missions to Third World Countries and also on Women who are Victims of Domestic Violence. … END_OF_DOCUMENT_TOKEN_TO_BE_REPLACED