The New Plastic Surgery Trend? Bragging About It! 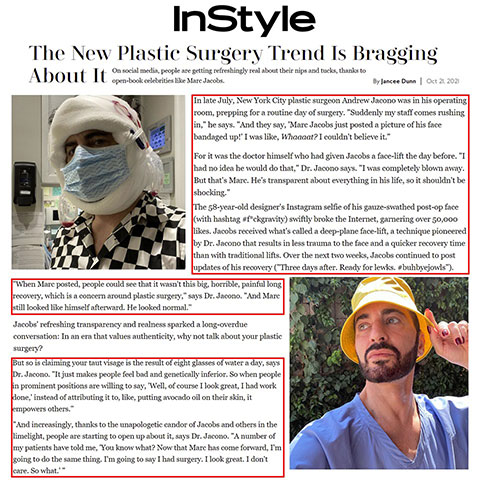 For a few decades, plastic surgery has been a secretive solution to aging. Even the most minor nip-and-tucks are shrouded in an air of mystery, only ever to be discussed and praised behind closed doors. Contributing to this taboo is the unfortunate fact that most people aren’t as aware of good outcomes as they are of poor ones.

Celebrities and other cultural icons, for example, become public laughing stocks when they step into the spotlight with glossy, distorted-looking faces—plastic surgery disasters Mickey Rourke and Jocelyn Wildenstein are perfect examples of this.

The social media sphere was understandably baffled, then, when in July 2021, fashion mogul Marc Jacobs revealed that he had undergone an Extended Deep-Plane Facelift with Dr. Jacono. He first posted on Instagram, a photo of his face wrapped in bandages with the caption “#f*ckgravity,” and proceeded to share, over the course of the next few days, updates about his recovery.

“On the day Marc posted that picture,” says Dr. Jacono, “I was in the operating room prepping for surgery. Suddenly, my staff came in and said that he had just shared a photo of his face bandaged up. I was completely blown away—I hadn’t asked him to do it! But that’s Marc: he is transparent about everything in his life, which is so amazing and admirable.”

In the months since, the 58-year-old designer’s Instagram selfies have broken the internet, accumulating thousands of likes and comments in support of his glowing results, and decided to be open about his experience. Jacobs’ realness has even sparked a long-overdue conversation: in an era of shameless authenticity, what’s the harm in talking about your plastic surgery?

What is the Deep-Plane Facelift, Marc Jacobs’ Procedure? 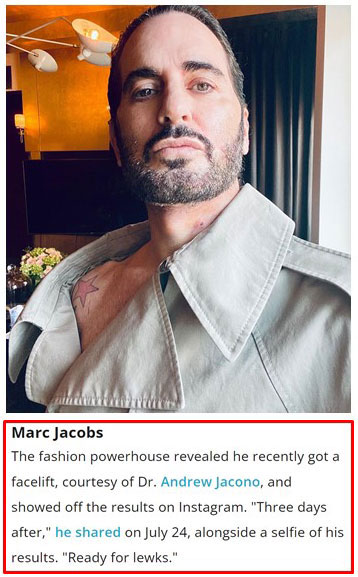 Marc Jacobs’ transparency would be for naught if his results didn’t hold up. He now looks considerably more refreshed than he did prior to his surgery, and the best part is that he doesn’t look like a different person—he looks like a younger version of himself

The reason for this incredible outcome is simple: Jacobs chose to undergo an Extended Deep-Plane Facelift, a complex technique pioneered and perfected by Dr. Jacono.

Unlike a traditional facelift, which pulls the skin taut without manipulating the face’s underlying musculature, the Extended Deep-Plane Facelift involves lifting the face’s muscles and fat pads as a unit, as well as releasing the facial ligaments, rather than peeling the skin away from its deeper structures.

These tissues are then repositioned on a higher, more natural vertical plane, which eliminates jowls, wrinkles, and other markers of aging. The result is a well-balanced appearance that doesn’t look “tight” or “pulled.”

“The reason why I love the Extended Deep-Plane Facelift is that it doesn’t fundamentally change the way patients look,” explains Dr. Jacono. “They look just like themselves, but fifteen or twenty years younger. It’s quite amazing, and it’s extremely gratifying to be able to provide this quality of service to people who just want to look their best.”

How Conversations About Plastic Surgery Continue to Shift

Marc Jacobs’ honesty may have inspired countless men and women to consider plastic surgery, but there is still a lot to be done before cosmetic procedures break free of their negative stigma.

“What surprises me is that the public expects celebrities to magically look the same year after year, yet if these people admit to having plastic surgery, they get disparaged,” says Dr. Jacono. “So, people are understandably reluctant to get surgery, even if they aren’t happy with the way they look.”

At the same time, Dr. Jacono believes that it’s unfair for influencers to pretend that, say, drinking eight glasses of water a day is what keeps them looking young. In fact, lying about beauty habits makes other people feel bad at best and genetically inferior at worst.

“This is why when people in prominent positions are willing to say, ‘Well, of course, I look great, I had work done,’ rather than attributing it to putting avocado oil on their skin, it empowers others to look into better, more reliable options.”

Fortunately, thanks to Marc Jacobs and a growing number of other icons, including Cardi B, Kaley Cuoco, and Jana Kramer, these taboos are slowly but surely lifting—and it seems to be only a matter of time before they vanish for good.

Doctor Jacono performs Charitable Surgery for Children with Cleft Lip and Palate on Missions to Third World Countries and also on Women who are Victims of Domestic Violence. … END_OF_DOCUMENT_TOKEN_TO_BE_REPLACED