Dr. Jacono is one of the most sought-after facial plastic surgeons 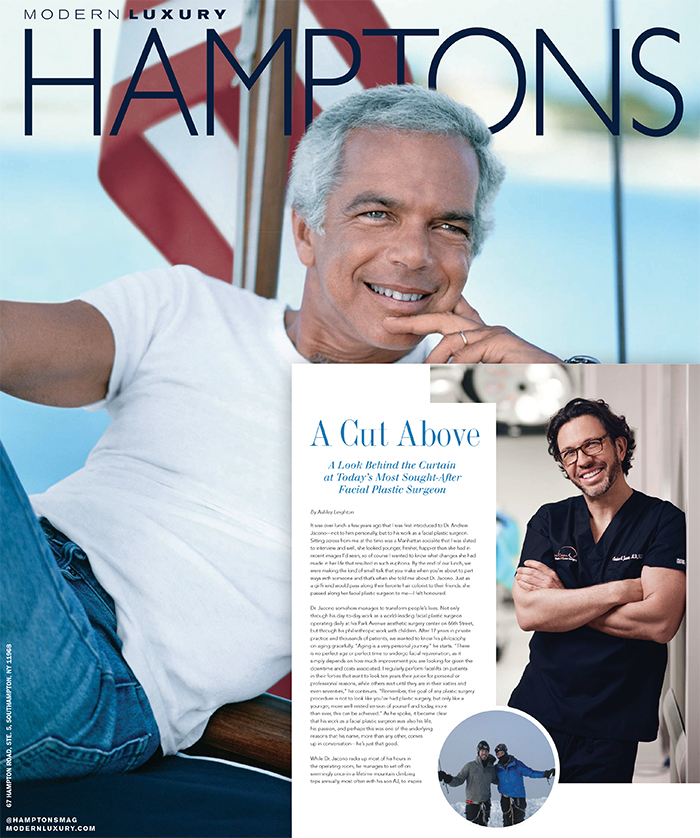 Dr. Jacono was featured in Hamptons Magazine. The article, by Ashley Leighton, takes a look behind the scenes at Dr. Andrew Jacono and why patients are flocking to his Park Avenue office.

It was over lunch a few years ago that I was first introduced to Dr. Andrew Jacono – not to him personally, but to his work as a facial plastic surgeon. Sitting across from me at the time was a Manhattan socialite that I was slated to interview and well, she looked younger, fresher, happier than she had in recent images I’d seen, so of course I wanted to know what changes she had made in her life that resulted in such euphoria. By the end of our lunch, we were making the kind of small talk that you make when you are about to part ways with someone and that’s when she told me about Dr. Jacono. Just as a girlfriend would pass along their favorite hair colorist to their friends, she passed along her facial plastic surgeon to me – I felt honored.

Dr. Jacono somehow manages to transform people’s lives. Not only through his day-to-day work as a world-leading facial plastic surgeon operating daily at his Park Avenue aesthetic surgery center on the corner of Park Avenue and 66th Street, but through his philanthropic work with children. After 17 years in private practice and thousands of patients, we wanted to know his philosophy on aging gracefully. “Aging is a very personal journey,” he starts. “There is no perfect age or perfect time to undergo facial rejuvenation, as it simply depends on how much improvement you are looking for given the downtime and costs associated. I regularly perform facelifts on patients in their forties that want to look ten years their junior for personal or professional reasons, while others wait until they are in their sixties and even seventies,” he continues. “Remember, the goal of any plastic surgery procedure is to not look like you’ve had plastic surgery, but only like a younger, more well-rested version of yourself and today, more than ever, this can be achieved.” As he spoke, it became clear that his work as a facial plastic surgeon was his life, his passion, and perhaps this was one of the underlying reasons that his name, more than any other, comes up in conversation – he’s just that good.

While Dr. Jacono racks up most of his hours in the operating room, he manages to set off on seemingly once-in-a-lifetime mountain climbing trips annually, most often with his son AJ, to inspire.

Doctor Jacono performs Charitable Surgery for Children with Cleft Lip and Palate on Missions to Third World Countries and also on Women who are Victims of Domestic Violence. … END_OF_DOCUMENT_TOKEN_TO_BE_REPLACED