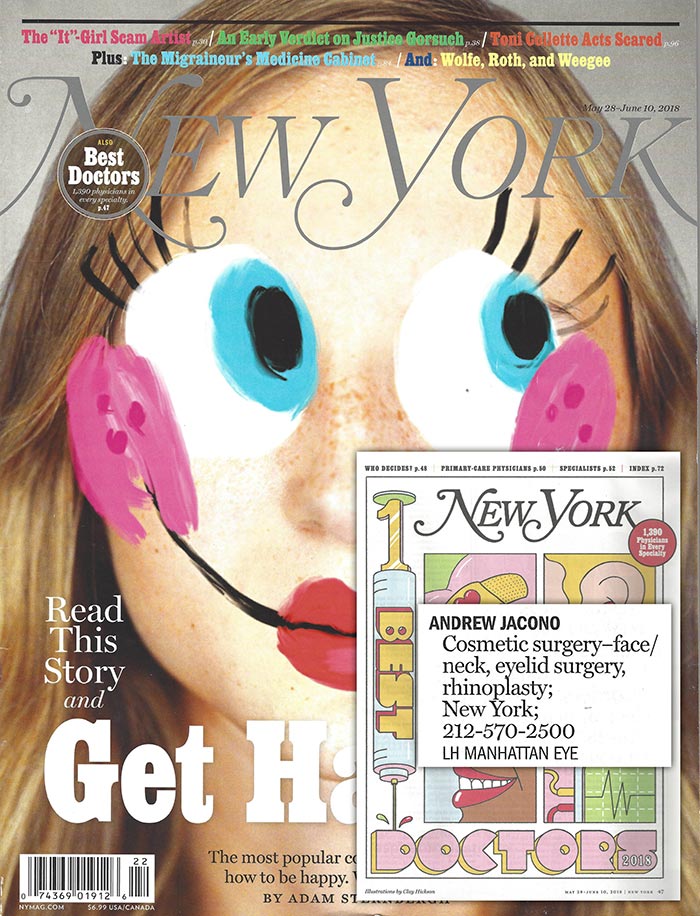 Dr. Jacono was recently featured in New York Magazine as a top facial plastic surgeon in New York City. The magazine evaluated physicians based on a number of rigorous criteria, and Dr. Jacono was consistently ranked at the highest level.

This honor comes at a time when Dr. Jacono has firmly established himself as the most innovative aesthetic surgeon in the country, if not the world. Over the course of his career, he has improved tried-and-true techniques. These include rhinoplasty, blepharoplasty, neck lift, and, of course, facelift. To him, perfection is at the intersection of precision and aesthetic acuity. In other words, successful surgery is about far more than just scalpels and sutures.

“I’m incredibly honored and thrilled to be included in this issue of New York Magazine,” says Dr. Jacono. “It has been my life’s work to offer the best surgical experience, and it feels wonderful to be recognized. I think my success is a combination of a few things: giving the highest quality care, achieving the most natural results, and offering empathy when patients need it most.”

What Sets Dr. Jacono Apart from the Rest?

It’s no secret that doctors are among the smartest and most capable members of the population. They spend precious years training and specializing in their own grueling fields, only to emerge into an even more competitive marketplace. It takes a truly special practitioner to set themselves apart, especially when everyone else is already at the height of their game.

Dr. Jacono is one of the incredible few who have managed to carve out their own niche. His office at 630 Park Avenue seamlessly combines beauty and utility, his surgical facility is state-of-the-art, and his technical ability is exemplary. Moreover, he has published extensively in medical literature about his surgical methods, garnering support from fellow medical experts.

However, what seems to differentiate Dr. Jacono more than anything is his facelift approach. The traditional facelift, on the one hand, separates the skin from its underlying muscle tissue before pulling the face taut. This gets rid of wrinkles and folds but can make the face look unnatural. In other words, patients who undergo this cookie-cutter facelift look like they’ve had work done.

Frustrated with the limitations of the traditional facelift, Dr. Jacono pioneered and mastered his own technique. It is known as the Extended Deep-Plane facelift. Instead of pulling the skin away from the underlying muscle, Dr. Jacono accesses a layer of deeper muscle and fascia, called the deep plane, without separating it from the skin. He then releases key ligaments before repositioning the framework on a vertical plane. The result is a smooth, wrinkle-free facial profile that does not appear overly tight. Patients most often look just like themselves, but ten to twenty years younger.

“I think the reason that my technique is so successful is that it doesn’t pull any punches,” says Dr. Jacono. “You don’t look like a plastic surgery disaster—you look like the person you’ve always been, just younger. In fact, my results are usually so natural that people can’t even tell my patients have had surgery. Instead, they think they’ve gone on a new diet or changed an exercise routine.”

For these reasons, Dr. Jacono has become renowned as a sort of magician, even though his method is grounded in years of accumulated knowledge and expertise. To him, the greatest failure of plastic surgery is placing technique over aesthetic sensibility. He believes that to be a good surgeon is to prioritize both.

Doctor Jacono performs Charitable Surgery for Children with Cleft Lip and Palate on Missions to Third World Countries and also on Women who are Victims of Domestic Violence. … END_OF_DOCUMENT_TOKEN_TO_BE_REPLACED