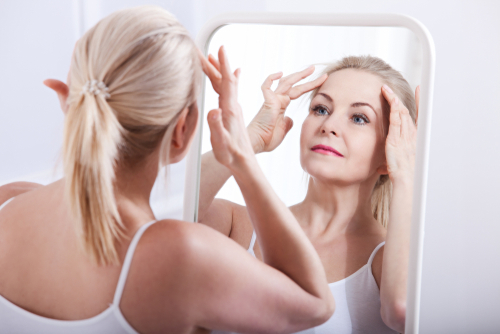 One big question that a lot of people ask when they’re considering facial plastic surgery is: does a facelift hurt? Often, people will see photos of someone who has had a recent facelift and be afraid of the bruises—they look painful. But the truth is that there’s surprisingly little pain after a facelift.

Yes, there likely will be bruising and discoloration at first in the face and neck, and tenderness accompanies the bruising. But it is merely a swollen feeling. Rarely does a patient feel pain at the incision sites. Some patients have said that they have a heavy feeling in their face, but this is due to the swelling, and it will go away.

If you have staples or stitches for the small incisions, the doctor will remove them usually within a week. In some cases, there will be a drain to remove any fluid. Dr. Jacono will give you care instructions for the drain and when it can be removed.

How Long Does It Take to Recover from a Facelift?

Facelift recovery varies from person to person and depends on the surgery. In general, however, this is the timeline for a traditional facelift.

On the day after surgery, you likely will be told to wear a bandage that will feel very snug around your chin. It is a tight bandage, but it is not constrictive. Rather, it will feel more like a sock around your foot. The bandage will reduce the swelling and help you heal faster (and make any pain go away sooner).

The bruising may last one to two weeks, but you should only feel pain for two to four days. Treatment is almost always over-the-counter pain medication. Usually, ibuprofen is all that is needed.

Returning to work is up to the individual, but generally, you can go back after ten to fourteen days. By that point, most of the swelling will be gone, and any lasting discoloration can easily be covered with makeup.

The recovery time for the entire healing process will be about four to six weeks, though it may take longer—up to three or four months—before you get the full view of what the facelift’s final results will be.

How Painful Is a Mini Facelift?

Because a mini facelift is less invasive and requires fewer incisions than a full facelift, it will be less painful and have a shorter recovery time. The pain for mini facelift patients will be very mild, and the swelling will be significantly reduced. Any pain should be gone in two to four days.

When Is the Best Age to Get a Facelift?

Facelifts are most often done for people in their 40s, 50s, and 60s, for both men and women. As the facelift is meant to tighten the skin, it is therefore reserved for people who have loose skin. This means people who have fine lines and wrinkles. In almost all cases, a facelift is not needed for someone below the age of thirty.
Ready to look your best? Schedule a consultation now.

Doctor Jacono performs Charitable Surgery for Children with Cleft Lip and Palate on Missions to Third World Countries and also on Women who are Victims of Domestic Violence. … END_OF_DOCUMENT_TOKEN_TO_BE_REPLACED