Sonja Morgan revealed she went under the knife to “get rid of the wrinkling” and jowls (a term used to describe sagging skin around the chin and jawline) that were “starting to form.” Following five months of filming—and right before quarantine—the 56-year-old quietly went under the knife for a nip and tuck with one of the best New York City Plastic Surgeon Dr. Andrew Jacono. 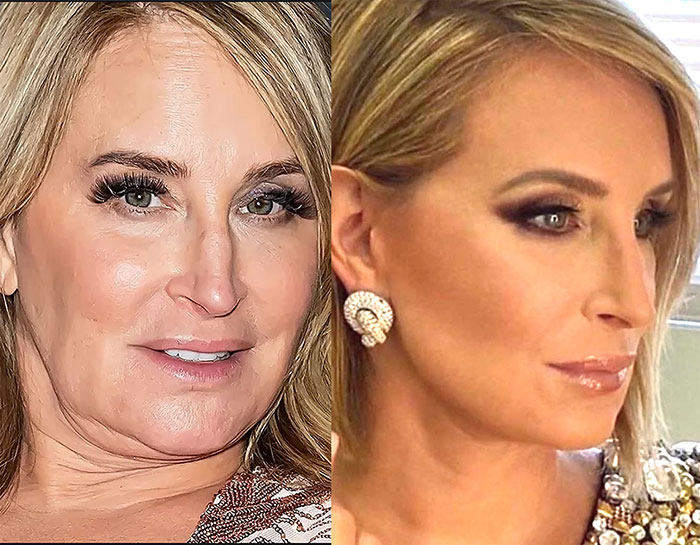 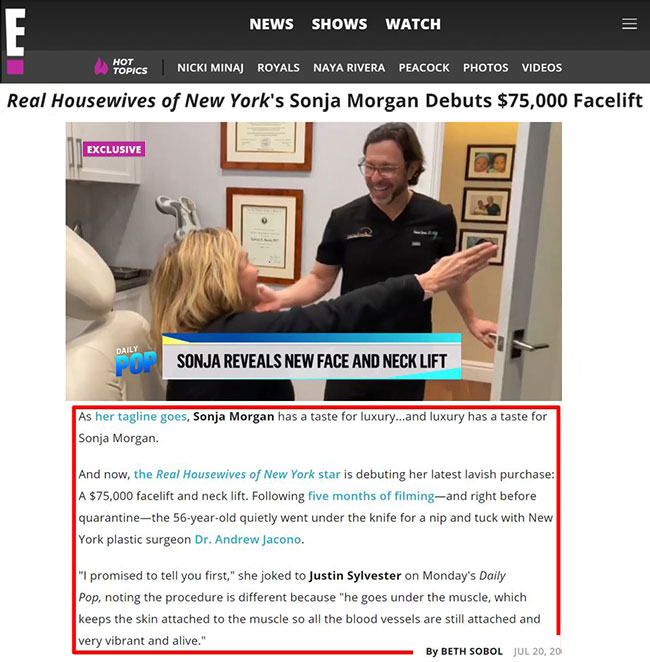 For Sonja Morgan of the Real Housewives of New York, the reveal was worth the wait. While viewers are seeing her pre-surgery face on the current season of the Bravo hit, she has started to slowly show off her new look on social media. “He’s the surgeon of all surgeons,” she raved. “I don’t take chances. My face is my money. Well, first my mouth is my money and like to say my assets are my money, too!”

Morgan shared that Dr. Jacono performed a Deep Plane Facelift, which “focuses on release and movement of muscle and fat layers instead of skin pull and removal,” “He goes under the muscle, which keeps the skin attached to the muscle so all the blood vessels are still attached and very vibrant and alive,” the RHONY star explained.

The goal, according to Jacono, was to give her a natural-looking revamp with minimal access deep plane extended facelift and accompanying neck lift. “It lifts the deep structures of the face while also releasing facial ligaments,” Jacono, author of The Park Avenue Face, explained to E! News. “Which results in a naturally volumized, heart-shaped face of youth, free of distortion or tension. It also eliminates the need for recurrent injectable fillers and fat grafting.”

The biggest difference with the approach, he continued, “is that it lifts the face vertically against gravity. Not pulled back to the ears, stretching the corners of the mouth, to avoid that dreaded ‘wind tunnel’ look.”

Dr Jacono further explains, “As you can see from her facelift before and after, a facelift can look completely natural with my signature extended deep plane facelift technique with absolutely no tightness because I am lifting the deep musculature and fallen fat pads of the face not pulling on the skin. But I think she looks 15 years younger!!!!”

“At the same time I performed a necklift with platysmaplasty to treat laxity and neck bands. Sonja has such beautiful facial structure, high cheekbones, beautiful jawline, and a long elegant neck. She has the perfect ‘scaffolding’, if you will, so I can give her a gorgeous result. I am humbled that she chose me for her surgery,” he shared.

The New York plastic surgeon also applauded Morgan for being so open and honest about her plastic surgery, saying, “I know that her coming forward will empower women who are considering taking control of their appearance.” And while Morgan had four months to recover amid quarantine, the final look is here to stay. “It can last approximately 10 to 12 years versus a traditional facelift,” Jacono said. “And the procedure is usually performed under twilight anesthesia.”

Doctor Jacono performs Charitable Surgery for Children with Cleft Lip and Palate on Missions to Third World Countries and also on Women who are Victims of Domestic Violence. … END_OF_DOCUMENT_TOKEN_TO_BE_REPLACED