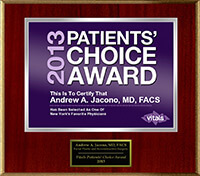 New York, NY, April 2013 – New York City Facial Plastic Surgeon, Andrew Jacono, MD, FACS has been honored with a 2013 Patient’s Choice Award based upon patient reviews for Dr. Jacono’s results after facial plastic surgery including facelifts, eyelid lifts, and rhinoplasty surgery. This rating is also based upon his compassion for his patients and his bedside manner. His patients always feel that their concerns are of utmost importance to him and that he cares for his patients like his own family. He strives each day to exceed his patients’ expectations, and he is grateful that they’ve recognized his efforts by reviewing their experience with his work online.

Only 5% of the nation’s 870,000 active physicians consistently received top scores from their patients, qualifying them for this honor in 2013. Millions and millions of patients review and rate their doctors on various components of care, including accuracy of their diagnosis, the amount of time they spent with the doctor, and the doctor’s bedside manner and follow-up care. Patients’ Choice reviews these rankings and other quality measures to compile its yearly list of award winners.

Doctor Jacono performs Charitable Surgery for Children with Cleft Lip and Palate on Missions to Third World Countries and also on Women who are Victims of Domestic Violence. … END_OF_DOCUMENT_TOKEN_TO_BE_REPLACED