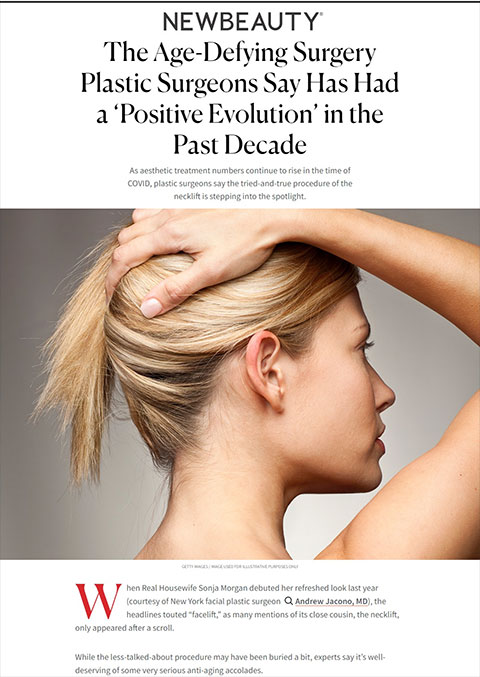 The Necklift: The Facelift’s Lesser-Known Cousin

In July 2020, Real Housewives star Sonja Morgan revealed that she had opted for cosmetic work with Dr. Jacono. Tired of looking in the mirror and seeing wrinkles and sagging facial skin, Morgan decided to take the plastic surgery plunge, and her results were nothing short of astounding.

“In my opinion, Sonja came out of the operating room looking 15 years younger,” says Dr. Jacono. “At the same time, she looked completely natural—not tight, pulled, or artificial.”

Morgan underwent two different surgical procedures at the same time: Dr. Jacono’s signature deep-plane facelift, as well as a lesser-known technique known as a necklift. Whereas the deep-plane facelift targets the areas above the chin, vertically lifting the face’s deeper structures while also releasing key ligaments, the neck lift focuses on the skin, tissue, and muscle beneath the chin.

“What’s incredible about the necklift is that it treats areas a facelift can’t, and it can also completely reharmonize the face’s balance,” says Dr. Jacono. “The goal is to correct laxity and banding on a swathe of neck muscle. When I perform a necklift, I go beneath these muscles and slide them back into their original, youthful position. It’s a complicated procedure, but it works wonders.”

The Benefits of the Necklift 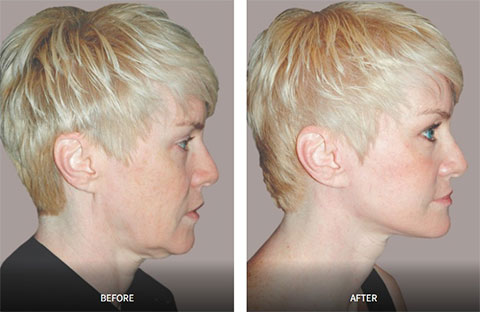 For a procedure as refreshingly dramatic as the necklift, it’s of some surprise that it doesn’t garner more popular attention. It is such a reliable treatment, in fact, that almost everyone who gets a facelift also undergoes some form of neck revitalization.

“The two surgeries go hand-in-hand,” says Dr. Jacono. “The reason for this is because it would look very strange for the face and neck to be at different points in the aging process. Nobody wants a smooth, young-looking face with a loose, drooping neck, and even fewer people want tight, sleek neck skin with a face marred by wrinkles and jowls.”

In short, the facelift and neck lift may be tailored to different purposes, but they ultimately work together for maximal rejuvenation, and more often than not, surgeons are happy to provide both to their patients at the same time.

Over the course of the last few years, plastic surgeons have seen a steep rise in demand for neck lifts. Dr. Jacono himself has been performing more of them than he ever has.

“The numbers are quite honestly incalculable,” he explains. “I don’t think I’ve done as many neck lifts in a single year as I did in 2021.”

According to the Aesthetic Society, an association of more than 2,600 board-certified plastic surgeons, the neck lift experienced a surge of almost 12% between 2019 and 2020, and since then, the number has only continued to swell. While many factors have contributed to this rise, some cosmetic surgeons, including Dr. Jacono, credit it in part to the “Zoom Boom,” a term coined by aesthetic experts and plastic surgeons alike near the beginning of the COVID-19 pandemic.

“The fact of the matter is that during the COVID-19 lockdowns, and even in a more stable time like right now, we saw our faces onscreen more frequently,” says Dr. Jacono. “Millions of people are working from home and have much more time to look at—not to mention deconstruct—each and every one of their flaws. As a result, I’ve seen an unprecedented number of patients since 2020, many of whom complain about how their turkey neck taunts them when they are on a Zoom call.”

Considering how popular neck lifting has become in recent years, it may not be far-fetched to say that it is now among the most sought-after facial plastic surgical procedures on the market. It is, after all, a quick, easy nip-and-tuck that can completely restore your appearance.

Doctor Jacono performs Charitable Surgery for Children with Cleft Lip and Palate on Missions to Third World Countries and also on Women who are Victims of Domestic Violence. … END_OF_DOCUMENT_TOKEN_TO_BE_REPLACED