Social Media and the Rise of Facial Awareness 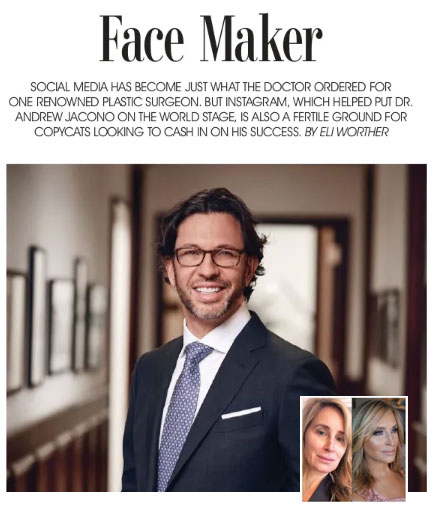 In today’s hyper-connected social media digital world, we have all become more aware of the way we look. Just about everyone has a smartphone with a high-resolution camera, and as a result, the selfie has become a symbol of shifting beauty standards. More and more, the average person tries to look their best at all times, as any and all facial imperfections can be magnified through the phone’s lens.

Few people are as aware of this societal shift as Dr. Andrew Jacono, a facial plastic surgeon who is a world-renowned expert on minimally invasive facelifts.

“As we continue to adapt to the digital world, we will continue to have an increased awareness of our appearance,” he explains. “Not only has the uptick in demand for surgery been fueled by the current stay-home culture, but also by the fact that we have all had more time to look at ourselves on Zoom, FaceTime, and in the mirror. We’re seeing our faces in ways that we haven’t before.”

The advent of social media has made it all the easier to grapple with questions of self-image. Instagram has had a particularly dramatic effect on modern beauty standards, and in Dr. Jacono’s case, it has become a place to showcase his work. He has amassed a following of close to 500,000, and regularly posts jaw-dropping before-and-after pictures.

“The responses I’ve had are incredible,” says Dr. Jacono. “Patients have flocked to my practice because of the pictures they’ve seen on my social media pages. They’re astounded by the before-and-after, and routinely tell me that they are the most natural and impressive they’ve ever seen. It’s flattering, of course, but it’s also a testament to how powerful these online tools are.”

Unlike most other surgeons, Dr. Jacono has the rare privilege of working with the face, which is extremely sensitive to even the most minor changes. While some would consider this a burden, Dr. Jacono views this as an opportunity to make advancements.

“A lot of people have a negative view of plastic surgery,” he explains. “This is because the most obvious results tend to be the worst. Celebrity plastic surgical disasters are well-documented and are usually a result of a surgeon’s poor technique and even worse aesthetic sensibilities.”

Because of this, Dr. Jacono has developed an innovative technique called the M.A.D.E. (Minimal Access Deep-Plane Extended) Lift. This procedure lifts the deeper structures of the face and releases key ligaments, resulting in a youthful, naturally volumized face free of distortion. It also eliminates the need for recurrent injectable fillers. What’s more, the surgery can be performed under twilight anesthesia, which is safer and gentler than general anesthesia, and results will last 10-12 years, considerably longer than those of a traditional facelift.

“The M.A.D.E. Lift merges science with craftsmanship,” says Dr. Jacono. “Even better, it provides results that are so beautiful and natural that it’s often difficult for my patients’ friends and family to tell whether or not they had surgery.”

Dr. Jacono’s surgical and social media successes have certainly attracted his attention, but one of his better-known patients recently came in the form of Real Housewives of New York City star Sonja Morgan, who opted for his signature M.A.D.E. Lift. 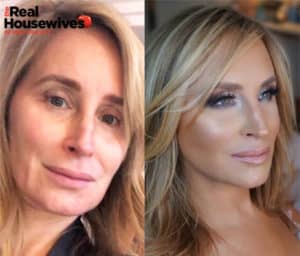 “The result of Sonja’s facelift is so amazing because she has naturally strong facial bone structure, which acts as a beautiful scaffolding,” says Dr. Jacono.

Dr. Jacono and Morgan herself posted before-and-after collages documenting the transformation. The responses were immensely positive, praising Morgan for her transparency and lauding Dr. Jacono for his incredible technical and artistic skills.

With fame both on and off social media, however, comes some unexpected drawbacks. For example, Dr. Jacono has had to deal with a slew of impostor accounts that have successfully catfished his patients out of thousands of dollars.

“The fact that this is happening is baffling,” Dr. Jacono comments. “It’s an extremely unfortunate side-effect of all the positive attention.”

As disheartening as these scams may be, however, social media has been largely beneficial for Dr. Jacono and his practice. He has been able to promote his work while connecting with his audience in a more personal way than ever, and that, to him, is a welcome honor.

Doctor Jacono performs Charitable Surgery for Children with Cleft Lip and Palate on Missions to Third World Countries and also on Women who are Victims of Domestic Violence. … END_OF_DOCUMENT_TOKEN_TO_BE_REPLACED