Dr. Jacono discusses getting group surgery with family, friends, and significant others

More People Are Getting Surgery with a Partner

Dr. Jacono was featured in an ABC News segment on pairing up with loved ones for plastic surgery. This group surgery phenomenon has seen a rise in recent popularity and has made it easier for certain patients to have the work they’ve always wanted.

“There is an inaccurate perception that plastic surgery is something you have to go through alone,” says Dr. Jacono. “That is simply not the case, especially today. More and more people bring their relatives, friends, and significant others to the doctor’s office. They even undergo the same procedures at the same time.”

According to 2005 statistics released by the American Academy of Facial Plastic and Reconstructive Surgery, 34 percent of facial plastic surgeons reported an increase in patients undergoing plastic surgery with a partner. This number has only swelled in recent years. Patients note that having a companion during the process makes the experience emotionally easier, not to mention less physically exhausting. In short, getting surgery with a loved one makes it more palatable. 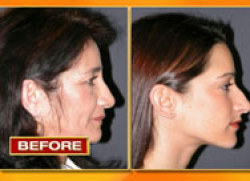 Elvia Rabinor said that she hadn’t seriously considered plastic surgery until her daughter, Lauren-Beth Kassinger, asked her about it.

“She called me one day and said, ‘What are you doing this next week? How about getting your nose done?’” said Rabinor. “It was a pretty surprising call to get!”

Kassinger was 28 when she had surgery in February 2003. She was a professional dancer and model working for Capezio. She had always been self-conscious of the small bump on the bridge of her nose, as well as her droopy nasal tip. Her mother had a similar nasal profile.

“I was always a little insecure my whole life,” said Kassinger. “And it just happened to be the right time in my life to do it. I didn’t want to do it alone.”

Rabinor, a dance instructor, was 49 at the time of her surgery. The tip of her nose was especially droopy, a symptom that often occurs with age. Although the mother-daughter pair wanted similar things from their surgeries, they ultimately wanted slightly different noses. Their plastic surgeon was happy to oblige to their requests. 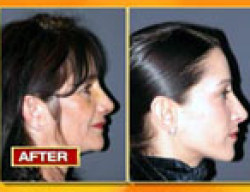 Kassinger and Rabinor are thrilled with their results and say that the experience brought them closer together. They found a reliable companion in each other and were able to heal together. According to them, there was no better way to go through the experience. They can’t imagine having gone through it without mutual support.

“I actually was really excited about taking this step,” Kassinger said. “I definitely am closer to my mom because of it. It is traumatic. It is a big change. It was so great to have her there with me.”

According to Dr. Jacono, such pairings are, while less common than individual experiences, not exactly rare. Getting moral support and bonding with a friend or relative through surgery seems like a logical solution to what could otherwise be a very lonely treatment.

“I routinely have mother-daughter and father-son pairs come in for surgery,” he says. “There is nothing quite as comforting as going through treatment with someone you deeply trust and love.”

Even better news about plastic surgery is that it is becoming gradually less taboo. In 2005, for example, surgeons performed 10.2 million cosmetic procedures, up 11 percent from 2004. The reasons for this are manifold, but to Dr. Jacono, the biggest contributing factor is that there are so many TV shows about plastic surgery. Social media has also done a great deal to demystify the process.

“The sheer volume of television shows and social media posts about plastic surgery speaks to its popularity,” he says. “Plastic surgery is extremely safe and is not something that people have to be afraid of. If you’re still doubtful, you can always bring someone along to share the experience with you. There are so many ways around the fear of something going wrong.”

That said, Jacono warns that people still need to take precautions before a nip-and-tuck. Any surgery can be dangerous, and healing can be long and difficult for some. To circumvent any potential problems, he recommends vetting your surgeon as thoroughly as possible. Make sure that they are board-certified and specialize in the procedure you seek.

“You should ask how many procedures they’ve done, and how many they do on an average weekly or monthly basis,” says Dr. Jacono. “You should also speak to previous patients and be able to see hundreds of pictures of the type of work you’re looking for. The doctor shouldn’t be hiding anything from you—their website is a good indicator of their training and expertise. Do your research, and never settle for anything less than the best!”

Doctor Jacono performs Charitable Surgery for Children with Cleft Lip and Palate on Missions to Third World Countries and also on Women who are Victims of Domestic Violence. … END_OF_DOCUMENT_TOKEN_TO_BE_REPLACED