Learn about the plastic surgery procedures that many celebrities are getting and how they are being transparent about going under the knife.

People have always shied away from revealing that they’ve had plastic surgery. There are unfair stigmas against those who seek outside help to look their best. It also doesn’t help that the purpose of plastic surgery is misunderstood. Ask the average person about their opinion on cosmetic procedures, and they’ll bring up celebrity horror shows: Janet Jackson, Mickey Rourke, Jocelyn Wildenstein.

Recently, however, the accessibility and influence of plastic surgery have blossomed. Thousands of previously unwilling people have become enthusiastic patients of their own, largely under the influence of their favorite A-listers. A growing number of celebrities have shared their experiences with plastic surgery on social media. They made sure to highlight not only invasive procedures but more temporary injectable and laser treatments, as well. In this regard, 2021 was one of plastic surgery’s biggest, most public years yet.

Here are just a few of its proudest and most important moments. 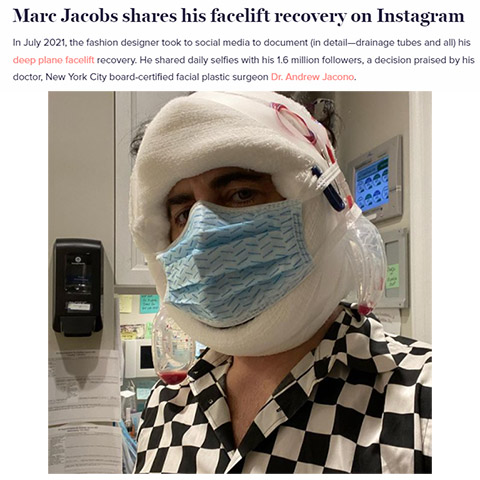 In July 2021, Marc Jacobs, the world-leading fashion giant, announced that he had opted for an Extended Deep-Plane Faceliftwith Dr. Andrew Jacono. He took to social media to document his recovery experience and results, sharing a slew of daily selfies with his massive audience. It was a major cultural moment: few others had ever been so open about their aesthetic choices. Jacobs was met with much praise and adulation as colleagues and media outlets rushed to congratulate him.

“A big frustration in the public is that highly influential people seem to be these untouchable genetic mutants. They make the rest of us feel like we’re overweight, unattractive, and generally not up to par,” says Dr. Jacono. “But the truth is, there’s a certain point in all of our lives when we can’t fix specific insecurities without surgery. Only adding to the confusion is the fact that people who look great rarely talk about how they got like that. So, when someone of Marc’s status very openly shares his surgical experience, it sends a message that it’s possible to look like yourself, it’s not as bad as you think, and you can get the results you want without looking like you had bad plastic surgery.”

Now, Marc looks just like himself, only fifteen years younger. He is as confident as ever in his decision to announce his foray into cosmetic surgery. If he can be open, why shouldn’t everyone?

The Kardashians are well-acquainted with gossip about their appearances, and Khloé is by no means an exception. During the Keeping Up With the Kardashiansreunion episode, Khloe admitted to the cameras that she had gotten a nose job and a number of injections. She didn’t specify which, but Dr. Jacono thinks these were likely Restylane, Belotero, or BOTOX. These compounds smooth wrinkles, add volume and reshape the face in subtle ways.

“What’s great about Khloé’s transparency is that she not only discussed her surgery but her history with injectables,” says Dr. Jacono. “When most people talk about cosmetic procedures, they usually gravitate toward the most involved operations, like browlifts, neck lifts, and facelifts. Often, though, patients visit my office seeking something more unnoticeable. I am always happy to recommend the perfect injectable or combination of injectables. They’re practically painless and take only a few minutes. Even better, there is almost no recovery time.”

Chrissy Teigen has a long history of being transparent about her cosmetic work, especially on Instagram. In September 2021, she revealed that she’d recently had fat excised from her cheeks, a procedure known as buccal fat removal.

“Buccal fat removal is a wonderful way to make the cheekbones look more prominent,” adds Dr. Jacono. “If you have too much buccal fat between your cheekbones and skin, your face can look a lot puffier than you want.” Later on, in November, Teigen also discussed her experience with an eyebrow transplant. She transferred hair from the back of her head to the very front. Since the star rarely wears makeup, she was excited about the results and was sure to post about them all over her social media pages.

If there is anything to learn from 2021, it’s that there’s no shame in trying to look your best. Own yourself and your self-care, and don’t let anyone drag you down!

Doctor Jacono performs Charitable Surgery for Children with Cleft Lip and Palate on Missions to Third World Countries and also on Women who are Victims of Domestic Violence. … END_OF_DOCUMENT_TOKEN_TO_BE_REPLACED