While it is far from a secret that some of our most beloved celebrities have had aesthetic work, whether, in the form of minimally invasive injections or full-blown cosmetic surgery, the majority of A-listers stay mum about their personal health and beauty choices.

The reason for this, according to Dr. Jacono, is quite simple.

“Major stars and cultural icons are among the likeliest to get plastic surgery because their looks are always being placed under a magnifying lens. As a result, they more often feel the need to address their most glaring flaws. It’s also due to this scrutiny that, most of the time, they choose not to reveal that they have had work done; they don’t want to welcome potential criticism.” 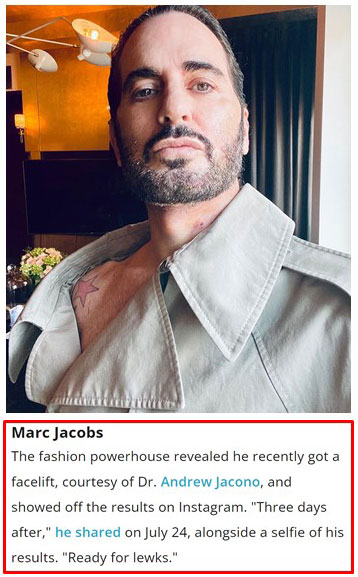 Considering that plastic surgery has been hush-hush, if not outright taboo, it is something of a surprise that stars have recently come forward to share their experiences. Just a few weeks ago, for example, Bella Hadid admitted that, at a very young age, she became dissatisfied with the shape of her nose, and so, at fourteen, she underwent a rhinoplasty. Since then, she has never had any other cosmetic treatments—not even fillers or Botox injections.

Hadid, of course, isn’t the only celebrity to have been transparent about her experience with plastic surgery. In July 2021, fashion mogul Marc Jacobs revealed that he had gotten a facelift—courtesy of Dr. Jacono—and proceeded to post day-by-day updates of his recovery process. The public response to his honesty was overwhelmingly positive, garnering much media attention and many thousands of likes across his social media accounts.

“Marc’s decision to be open about his surgery was extremely brave,” says Dr. Jacono. “It was so thrilling to see him embody himself without fear of judgment, and it was even more incredible to see how supportive his fans were. Sometimes, when people admit that they have had cosmetic surgery, even their closest relatives can resort to criticism. If nothing else, Marc has proved that there is no reason to be ashamed of who you are, less so of the things you’re doing to look your best.” 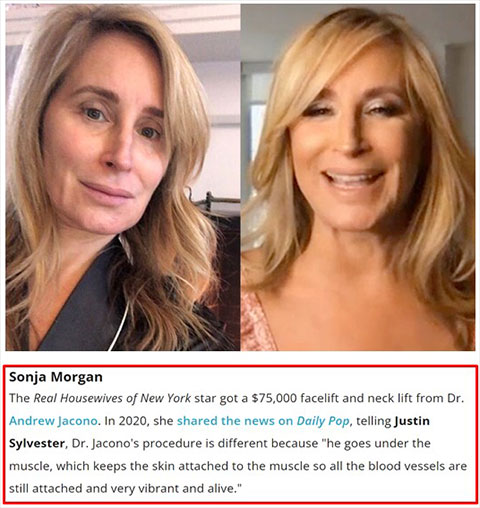 Jacobs’ announcement echoes that of Sonja Morgan, who also underwent a facelift, as well as a necklift, with Dr. Jacono in 2020. She shared the news on Daily Pop, explaining to Justin Sylvester that Dr. Jacono’s procedure, the Extended Deep-Plane Facelift, is probably the safest and most consistently astonishing facelift technique on the market.

“Being able to work with Sonja was a dream come true,” says Dr. Jacono. “I am a huge fan of The Real Housewives of New York, and Sonja is one of the most gracious patients I’ve ever had the pleasure of working with. It’s an added bonus that she was so open to discussing her surgical experience, especially because she looks so great: just like herself, but twenty years younger.”

When you hear the word “facelift,” you probably think of cat-woman Jocelyn Wildenstein or frozen-faced Mickey Rourke, the two best-known plastic surgical horror stories in Hollywood. However, contrary to popular belief, these sorts of results are anomalous.

“The vast majority of facelifts do not deform you,” says Dr. Jacono. “A good facelift reverses specific problems, like jowling, wrinkling, and sagging—in other words, it refreshes your appearance. The last thing a surgeon wants to do is make a patient look like they’re in a wind tunnel.”

That said, there are many facelift techniques out there, and all of them offer different outcomes. Some produce more natural-looking results, whereas others create tighter, more “doctored” looks. Dr. Jacono’s method, the Extended Deep-Plane Facelift, falls into the former category; rather than separating the skin from the muscle and pulling everything aggressively taut, Jacono dives into the face’s deeper architecture and repositions the underlying muscles on a more natural vertical plane. This prevents the face from looking unnaturally glossy.

“Almost all of my patients want to look like themselves, just younger,” continues Dr. Jacono. “The wonderful thing about the Extended Deep-Plane Facelift is that it delivers on this request and leaves my patients extremely happy. This, to me, is the most gratifying thing about my line of work—I have the rare privilege to help people find new confidence in themselves.”

Doctor Jacono performs Charitable Surgery for Children with Cleft Lip and Palate on Missions to Third World Countries and also on Women who are Victims of Domestic Violence. … END_OF_DOCUMENT_TOKEN_TO_BE_REPLACED