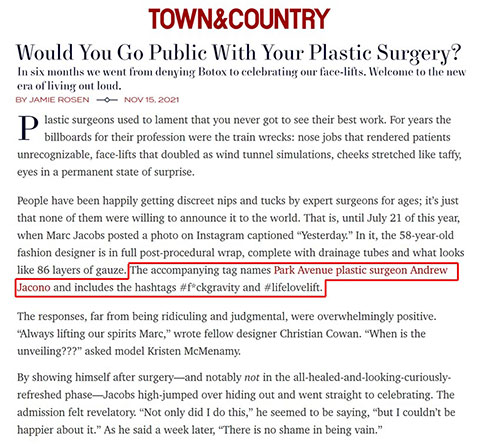 For decades, plastic surgeons and dermatologists alike have relished their work in private. Normally, natural-looking results pass under the radar, allowing patients to go about their lives without serious social changes. Poor results, on the other hand, leave clients stretched and unrecognizable. Botched surgery gives the field a bad name and spreads the inaccurate perception that nobody should undergo cosmetic work. This sort of stigma persists today.

The unknown truth, however, is that people have been happily getting discreet surgical nips and tucks for ages. The problem is very few of these people have been open about their experiences. That is, at least, until July 2021, when designer Marc Jacobs posted an Instagram photo of himself wrapped in gauze and drainage tubes. Jacobs captioned the shot “Yesterday. #f*ckgravity #livelovelift.” He was thrilled to extend praise to his plastic surgeon, Dr. Andrew Jacono. Jacono is the pioneer and undisputed master of the extended deep-plane facelift. This procedure, unlike other facelift techniques, offers natural-looking results that are not tight, pulled, or hyperextended.

“The public response to Marc’s post was nothing short of astounding,” says Dr. Jacono. “It was refreshing to see millions of people band together and celebrate that a public figure was honest about how he’d taken control of his looks.”

According to Dr. Jacono, the veil on plastic surgery has not only been lifted but has been replaced with the pride that social media promotes. After all, if most people share their diets, exercise routines, and injection choices on public platforms, then what is the harm in acquainting the world with surgery? The Real Housewives, as well as the Kardashians, have even taken the cameras to their dermatology appointments. This has opened countless doors and allowed people to feel as good about themselves as ever.

Why the Sudden Change? 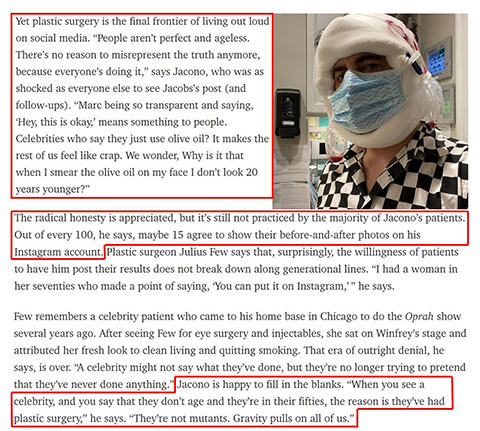 One of the biggest reasons for this recent shift is that people have become hyper-aware of the fact that we’re not perfect.

“There’s no longer a reason to misrepresent reality,” says Dr. Jacono. “Thanks to social media, most of us have become aware of our imperfections. We’re tired of pretending that these flaws don’t exist. That’s why Marc coming out and saying, ‘Hey, this is okay,’ meant something to so many people. Nobody wants to hear a celebrity claim that smearing olive oil on their face makes them look younger. In fact, listening to those kinds of lies makes us all feel worse.”

Interestingly, this radical honesty has not yet trickled down to Jacono’s patients. Of every 100 people he sees, 15 agree to show their before-and-after photographs on his Instagram account, which has amassed a following of almost 500,000. At the same time, he has noticed that patients’ willingness to broadcast their results does not break down along generational lines.

“You’d think that younger people would be more willing than older people to show their outcomes on social media. This isn’t necessarily the case,” says Dr. Jacono. “I routinely have patients in their 50s and 60s ask me to post their before-and-after pictures. It’s pretty amazing to see.”

Still, as more influencers choose honesty, the more comfortable the average person will feel about opting for better solutions. For example, when Gwyneth Paltrow began to use Xeomin to “look less pissed off,” and subsequently founded Goop, she inspired broader cultural conversations about wellness, mental health, and intimacy. These topics were previously too difficult to navigate.

“The goal of any wellness routine is to make you feel better about who you are. It can be meditation, skincare, a special diet, or even injections and plastic surgery,” says Dr. Jacono. “There’s no reason to believe that you don’t have the right to look your best. The days of personal dissatisfaction are quickly drifting behind us. Better for everyone that they are!”

Doctor Jacono performs Charitable Surgery for Children with Cleft Lip and Palate on Missions to Third World Countries and also on Women who are Victims of Domestic Violence. … END_OF_DOCUMENT_TOKEN_TO_BE_REPLACED